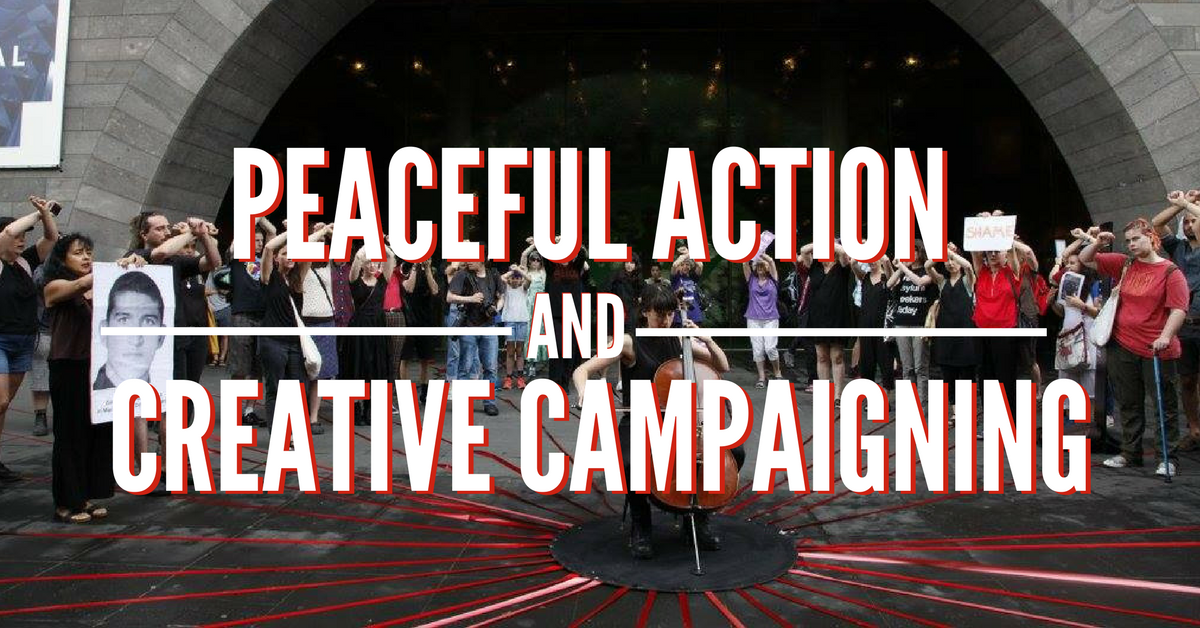 What do you do when an organisation and/or the media refuse to meaningfully engage with an issue? Do something visible and disruptive so that they have to engage with it!

That’s what the Artists’ Committee did when they organised their protest against the NGV’s contract with Wilson Security, doing stunts like dying the water of the NGV pond red and covering a famous painting with a black veil.

In light of their recent win, YAP is holding a workshop on non-violent direct action. As an creative form of action that draws mass attention to an issue, it’s a particularly effective way to generate awareness about the issues affecting people seeking asylum.

Come along and learn about the principles of non-violent direct action and how you can plan your own action!

GABRIELLE DE VIETRI is an artist and activist living and working in Naarm (Melbourne).

She is a co-founding member of the Artists' Committee, an informal association of artists and arts workers that makes collaborative public work around the intersection of money, ethics and culture. Most recently the Artists' Committee successfully concluded a campaign to end the contract between the National Gallery of Victoria and Wilson Security because of the security firm's human rights abuses on Manus Island and Nauru.
She is also the co-founder of A Centre for Everything, a curated program of events that bring together the social, political, creative and culinary into one evening.
As an artist, Gabrielle has held major exhibitions in public spaces, non-traditional art spaces, and major galleries around Australia and internationally.
NICOLA PARIS has been working with CounterAct for five years, to support new waves of community activists rising across Australia, and has trained 1000s of people in non-violent direct action, and grassroots campaigning skills. She has 15 years’ experience working across the progressive spectrum on a range of environmental and social justice issues, from blockades to boardrooms, from the federal parliament, to frontline action in Antarctica.

She has played a key role in frontline environmental campaigns across the country – from defending the Kimberley, and protecting the Beeliar Wetlands near Perth, in WA – to climate justice related campaigns on the east coast including large convergence events such as the Pacific Warriors flotilla at the Newcastle coal port.

She has also worked with unlikely suspects such as anti-gambling advocates and childcare workers to prepare and support them for direct action, and supported refugee activists in their anti-deportation campaign.

We look forward to seeing you there!

We Are Stronger With Friends

Share this event and spread our message of hope over fear. Working together, we can build a powerful movement for change.